The 'Water' stand-alone property package that is installed with COCO is based on the IAPWS-97 industrial specification for properties of water and steam. It is useful for simulating utility steam. This can for example be done by adding the Water Property Package to your simulation in addition to the property package that is used for calculation of the chemistry. A separate stream type can be used in COFE for utility steam. This stream type can then be used to simulate the steam side of a heat exchange, or the water side of a cooler.

The above properties are based on:

The IAPWS-97 formulation splits the thermodynamic calculations up into regions as shown in the figure below. This figure therefore also shows the valid regions for calculation with the Water package: 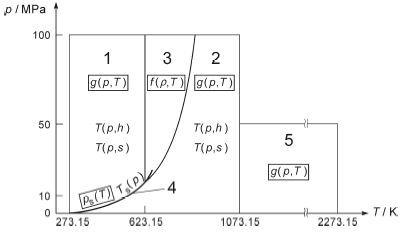 The water package provides equilibrium calculation based on the following combination of specification variables: